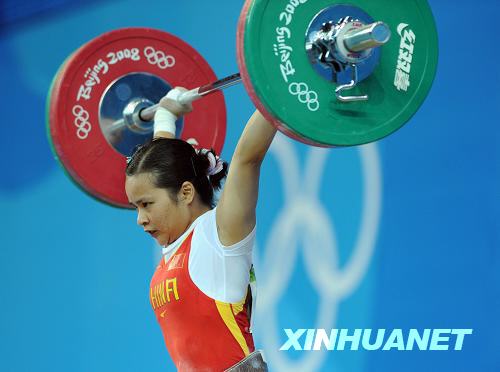 Chen Xiexia of China takes a good snatch lift during the women’s 48kg group A competition of weightlifting event at Beijing 2008 Olympic Games at the Beijing University of Aeronautics & Astronautics Gymnasium in Beijing, China, Aug. 9, 2008. [Xinhua]

China’s Chen Xiexia won the women’s 48kg weightlifting title, the first gold medal for the host at the Beijing Olympic Games on Saturday.

Chen snatched 95kg and jerked 117kg for a winning total of 212kg, a new Olympic record. It’s also the country’s first Olympic gold in this category.

“It will be a great inspiration to the whole delegation,” he said.

Chen, gold medalist of the 2007 world championships, was in a good form in Saturday’s competition, shouted “Hey! Go!” to cheer herself up before all the six successful attempts she made. All home fans roared and applauded to cheer the hot favorite.

China has dominated this category by winning 17 gold medals out of the total 19 world championships since 1987, however, it lost the title to Turkey in Athens Games and didn’t enter the class at the Sydney Games, when the women’s 48kg division was included for the first time.

Chen played a sure-win game on Saturday in the Beijing University of Aeronautics and Astronautics (BUAA) gym, as nobody posed a real threat to her during the event.

The silver was taken by junior world champion Sibel Ozkan of Turkey at 199kg. Chen Wei-Ling of Chinese Taipei settled for the bronze at 196kg.

Defending Olympic champion Nurcan Taylan of Turkey and Pramsiri Bunphithak, silver medalist of 2007 World Championships, both of whom had been tipped as Chen’s major rivals at the Games, withdrew from the competition as they failed all three attempts in snatch.